Garmin, Tracking and Courses. How it Should Work.

I’ve been a Garmin 310XT and Connect, their web platform for monitoring and managing your GPS activities, for some time now, but I’d never actually used all the available features.

Features such as Multi-Sport, seeing an outing later this year when I actually attempt a triathlon, and Courses, a feature that allows you to create a route you are going to carry out an activity on, transfer it to your device, and then have the device keep you on Course and track you against it.

There were a number of things that I thought a Course would offer and do for me, unfortunately the expected features just aren’t there and it turns out that Courses are seriously underutilised and exploited.

Let me tell you what Courses in Garmin do first. Through the site you can save a route you have already recorded as a Course, or create a Course from scratch. Either way you will be editing it to make sure the Course is spot on, much like the way you can see in the first image below.

With a Course you can assign all your recorded activities from that route to that Course. That’s great, it gives you a list of activities you have carried out on that Course. Handy.

You can also save the Course to your Garmin device and have the device navigate you along the Course. Telling you when turns are coming, what your time has been from turn to turn, along with all the usual activity tracking functions. Once again, handy, especially if it’s a new route you’re on.

After that, the Courses do nothing. That’s what surprised me.

I had thought, that on the site, I could look at a Course and compare the activities stored against it. For example if I had twelve runs on that Course, see which was fastest, compare split times, and so on. Just as you can do with segments. No, you can only textually list the activities and reorder them as you would any list.

I also thought that, since I was running on a predefined Course, that the GPS track would “stick” to that Course, after all my Garmin was telling me when turns were coming and making sure I did stay right on track. Not so. The track is, as ever, like me at 3am after a big night out. Have a look at this diagram to see what I mean. 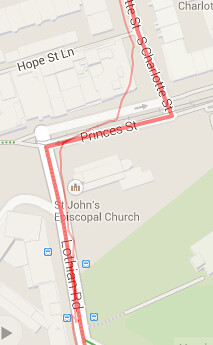 In the image to the left the thick, darker red line, the one following the road, is the Course that I created. The wandering, lighter red line, the one that goes over the edge of the roads and through buildings, is the tracked run I did with my Garmin 310XT set to follow the saved Course.

It seems strange to me that the tracked run is so all over the place considering the watch is navigating me to the saved Course and that the Course is so precisely marked out.

What I had thought would happen is that my tracked run would “snap” to the Course that I was running, except of course, if I ran off in an opposite direction and kept going, for example if I had run left at the junction of Lothain Road and Princes Street, and not right as I did. Instead it behaves as the Garmin so often does when the accuracy drops, it just starts going wildly off track.

Regardless of Courses, I would have thought it would have made sense to allow the software on the site to auto-correct a track when it is uploaded, especially one that is so obviously following roads or mapped paths. However this is especially true when I’ve mapped out the Course beforehand and am recording the activity directly against the Course.

From just south of the “th” in Lothian Road, you can see the behaviour I had hoped for. The track does meander, but it never strays far from the Course marking nor from the mapped street. Completely logical.

So why don’t Garmin make Courses behave this way? Or at least do something more useful than navigating you on new routes or acting as a heading for a list of activities? 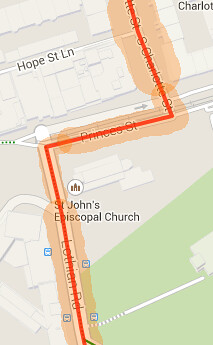 Here’s what I’d like to see Garmin do with Courses. First, on the Connect site, I’d like them to allow reporting and analysis of activities against each other for a Course. When I select a Course I should see the activities grouped by type, i.e. running, cycling, etc., and ordered by fastest time. I should be able to analyse these activities against each other, for example the average cadence across runs or the highest heartrate across the cycles on that Course, and so on.

For recording against a Course, I would expect that my tracked GPS route stay true to the Course I’ve uploaded to my device and I am running against, and if I’m wildly off course then it will start to record away from the route, but if I’m not, and the device is still directing me on the Course, then it should be recording me as there.

I’m sure someone will be saying “but what about if I decide to travel away from the Course? What if Garmin keeps sticking me to it?” Well that’s easy. In the image here you’ll see that I’ve mocked up what the accuracy might look like on the route. The lighter red, wide track would show the +/- accuracy from the actual running line.

Now, if the Garmin detects I’ve moved out of this zone of accuracy, a figure it knows itself as I have it showing on one of the screens of my Garmin 310XT, then I can be recorded as moving off in that direction. Otherwise, I should be recorded as sticking to that red line for the Course. Doesn’t that work?

Doesn’t that all make much more practical and logical sense than what Courses are just used for – a list heading and a new route navigation tool? To me that seems like a lot of wasted potential and functionality.