A big day was in store. On Thursday the 30th I received another Hospital letter for another quick appointment, this time on Wednesday the 2nd, just the following week. First up was a surgery consultation at 10:00, then from 12:30 a series of tests to get me ready for the operation list.

My anxiety levels are rising step by step on this process, and it’s often difficult to control my thoughts, no matter how irrational and unfounded in fact they may be. The more time I’m left to mull something over the worse it becomes, and so it was good to receive the appointment letters giving me less than a week to the actual appointment.

Those anxiety levels were rising like crazy before I got to the first appointment, which is odd considering I had my list of questions to find out everything I could from the surgeon. Answers I’ve been wanting for some time. It was what I’d been hoping for, a chance to find everything out. Unfortunately it didn’t turn out to be everything I wanted to hear.

I was seen pretty promptly at 10am, but while I waited it was shocking to see the figures of people who hadn’t even bothered to turn up for their appointments. Meanwhile the media and opposition politicians are blaming the Government, the Trusts, the managers, anyone they can. Yet look at the following figures, on the wall of the cardiac out patients department, and bear in mind this was just the 2nd of the month. 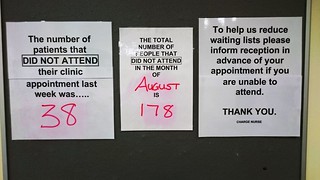 Now someone I know (yes, you Patrick) pointed out that this figure means little unless you know the total amount of patients who went through the clinic, and I would agree with that if we want to talk raw statistics. However, the percentages and statistics do not represent the lost number of hours of staff or equipment in dealing with a no show for an appointment. Considering an appointment can be anything from one to two hours, that’s anything from 178 to 352 lost hours. That equates to around fifty days, if we consider a standard working day is seven hours (I’m sure that’s not the standard day for hospital staff), then that is 10 working weeks.

So yes, to understand the percentage and analyse the data, the total throughput of patients does need to be know. However that does not change the fact that this same amount of time has been wasted by patients, and patients with heart problems. Patients who just didn’t bother to turn up for their appointments.

Anyway, back to me! The first appointment with the Registrar Surgeon turned out to be a bit of an eye opener. We discussed many of the finer points of the surgery, but he also took myself and my wife through why I needed it, most of which I already knew. Until that is he came to explain why it’s been a bad idea for me to be exercising, a reason for this accelerated requirement for surgery.

It seems that my aortic valve has is about 1cm wide when it should be 1inch, or 2.54cm. Now that’s a fair size difference when we’re talking about the heart pumping oxygenated blood around a body. Here’s a little mock-up I’ve done to demonstrate.

Due to this rather large restriction, or small whichever way you look at it, my heart has been working even harder to maintain a strong flow of blood and a normal pressure in the rest of the body, and because of this hard work the walls of one of the chambers of the heart have been thickening, as they would with any muscle. Thickened heart muscle isn’t good though, and that could lead to problems later in life. Heart failure is something I’m trying to avoid!

That is funny because I remember taking a conscious decision to do whatever I wanted rather than, as I was basically advised at the time, sit around and do nothing vaguely strenuous until the time came for the operation. I made that choice and knew what I was doing, or at least I thought I did. I knew it could lead to complications and the potential of a shorter life, but then at least I would have lived that life.

Strange now that the consequences have arrived that I’m slightly reconsidering that option. I wouldn’t have just done nothing, but I could have tempered what I did do. Mind you, I’ve had a lot of fun doing what I did! I do wish though that I’d had it explained and discussed as well as I did that morning back then. I do like informed decisions.

Back to the present day though, and one of the more amusing moments of our chat was discovering that we could decide about the type of valve right up until the moment the mask was being put on me to knock me out. “Wait, no pig…no cow…no carbon pyrolytic!”

The valve I think we’ve decided on is one made with Pyrolytic Carbon, I’m told far better than Carbon Fiber. This does mean I’ll be on Warfarin for the rest of my life, however the valve won’t deteriorate, and the chances of needing another replacement valve are next to none, unlike the chances if I took a pigs or cow valve.

Interestingly I was ready to ask why human valves aren’t used just as the surgeon revealed that there was a third option being trialled. This would involve removing the pulmonary valve and placing it in the aortic valve position, then taking a dead person’s pulmonary and putting it into my heart. I would have no qualms about doing that, if it weren’t a trial and it was obviously an increase in risk with more complicated surgery.

I think I’m definitely going for the Pyrolytic Carbon valve replacement and Warfarin. Which I believe used to be used as rat poison. The downsides are that I become toxic to rats, should they ever decide to feast upon me, and my blood will not clot as easily as others. So if I have an accident where I cut myself seriously, like chopping open the end of my thumb as I have done twice now in the kitchen, I need to go to the doctor, or even the hospital, and treat it much more quickly and severely as before.

So after all that serious chat there was time for a coffee before the 12:30 appointment. There we found ourselves sitting in a group of patients who were going to be having various types of heart surgery in the coming weeks, and hearing about the whole process from our liaison nurse. Kirsty was, and is, fab. Her and her team did everything they could to reassure us and I have to praise they way the handled themselves and delivered the vast amount of information we needed to soak up.

Not only that but while we were all going through our check-list of various tests – yes we really did have a check-list that had such wonderful things on it such as “Urine, Blood, Swabs”, eight or nine in all – they made sure we were always moving to our next test. Each of the patients, six in all, would arrive back at our meeting room and be taken to the next location for the next test, or in one case conversation. They were great and made us feel at ease, always keeping us on the go.

When I get nervous and concerned I tend to talk, ask questions, engage people and try and get the banter going. I guess it’s something that puts me at ease and if everyone’s talking I can’t concentrate on anything too scary. They not only put up with me but also tried to answer all the questions I had, and I had a lot of questions. They also gave us a big chat about was going to happen before and after the operation, and how they would look after us, and how we were expected to look after ourselves.

All in all it was a rather scary afternoon. Hearing and seeing just how badly my heart has been affected, realising just how close the operation could be, hearing the technicalities of the operation, and understanding just how painful it’s going to be, all kept slapping home the glaring reality of what is about to happen.

Oh, and when I say about to happen I really do mean that. The surgeon who will most likely operate on me, a considered intelligent chap, talked about the end of September, start of October. However the liaison nurses pointed out that the schedules are set on a Wednesday and, on any given Wednesday (I know, I know!), I could receive a phone call asking if I wanted to go into hospital on the Sunday afternoon for an operation Monday. Now that’s scary.

To end on a lighter note, there was another funny moment when we arrived home. Before I left I had to quickly change the shirt I was wearing. Without thinking I grabbed one and threw it on. It wasn’t until I got home I realised what had been plastered over my chest all day, and for that fellow patients, I apologise. 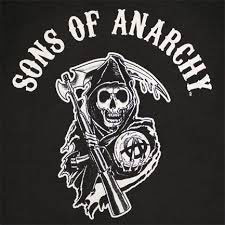