Shots from a Pentlands Cycle

I headed out for a cycle this afternoon and decided to head up the Pentland Hills. This is often a bad choice if I’m just thinking of a shorter run, which I was today, as you go so far into the Pentlands and end up taking a nice scenic and long route. Also, the route I took means it’s about 7km before you’re past Allermuir Hill and really hitting hitting the enjoyable bits.

So it ended up being a big cycle, 32.48km it says, and I took a few cool shots on the way, including an interesting Motion Stills/Hyperlapse high-speed video and some nice Google stylised shots.

Here’s the route I took, as seen in Strava:

My first shot was a proper photo. I say proper photo, this is a Google Pixel I’m using, with the stock camera software and no retouching. Still, I think it produces some great shots. Probably even better if I could get my monitors calibrated properly and use a bit of Photoshop – one monitor shows this shot really dark and contrast flooded, the other faded and very light. I just can’t get them right.

Anyway, this is from the high point of the cycle. Just by the final run up to Allermuir Hill looking southwest. Here’s the location: 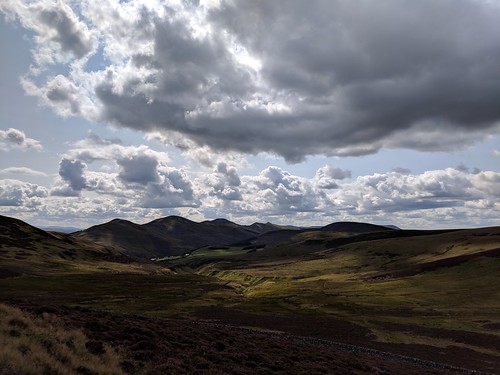 Have to say it looks really dramatic, although too dark on one monitor and too bright on the other. Very infuriating. However, it’s not been changed so it’s straight from the camera. With light touch shades on at the time, it did look fantastic.

Later, I took a little GIF in Google’s Allo app to show my wife where I was, she was getting her hair cut at the time and was talking about how many buses she’d missed on the way in and how crowded the place was. My response was: 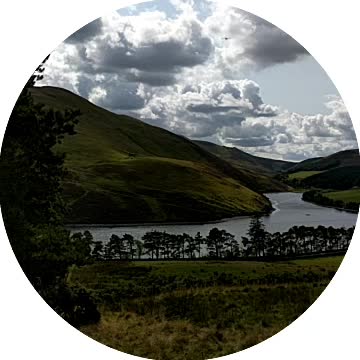 First time I tried panning with it, not such a smooth motion but it is a little GIF designed for inline chat.

Loganlea Reservoir was surprisingly empty from this angle, there were quite a few anglers out though, as can be seen by the cars on the right of the shot. The one angler in a boat is what caught my eye, and the rare sight of sun across the water. I’d love to pop out the bushes in the hills a bit more, it looks like a thick lush carpet. 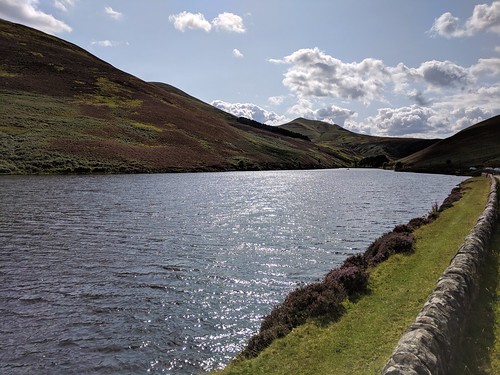 That shot was taken from here, and if you’re interested in the fly fishing there, you can visit the Loganlea Fishery site. On their banner photos they have a great shot of someone fishing with the hills covered in snow:

Then there’s the waterfall I always seem to stop at. This is nestled in a nice valley near The Howe house, which is about to be sold and I’m sure taken on by someone who’s going to renovate it and make a wonderful house there. I’m jealous. A Hufhaus right there would have been amazing. Before I leap into all the photos, here’s the spot I’m talking about:

The first shot I took was a pretty standard one: 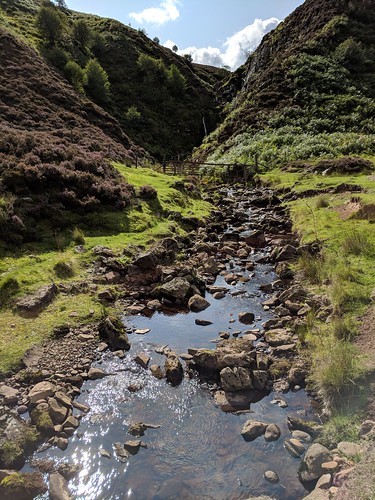 Later Google stylised it for me, which just meant turning it black and white. Before I uploaded it to Flickr I slightly tweaked the brightness and contrast to make it a little more moody: 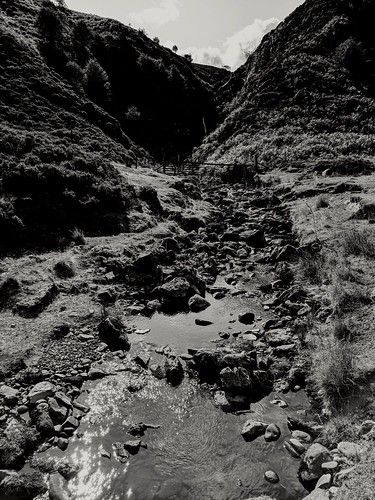 I had to take a lens blur shot as well, and this one turned out quite well. There’s always that feeling when you’re raising the mobile that it’s going to fail, especially when the cursor moves so slowly upwards. I think this happens when there’s not a prominent item in the foreground, like here. However, it worked: 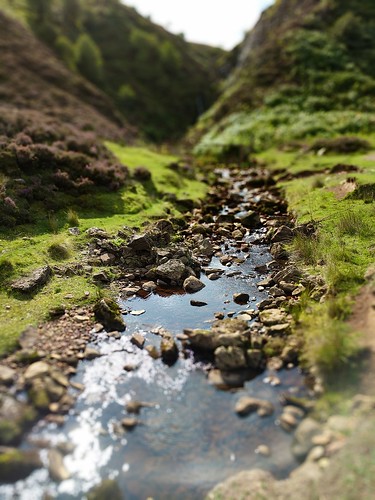 While I ate a porridge bar and drank it down I turned to look at the way the stream was heading, and took two shots. I couldn’t quite decide which is the better, maybe you can. 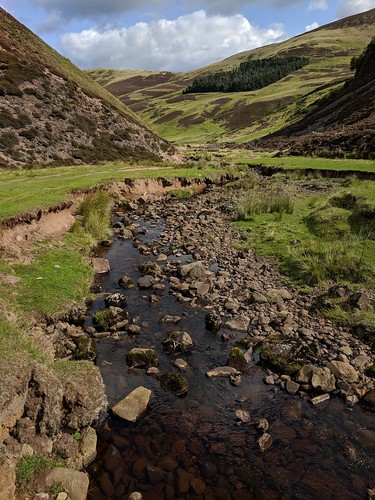 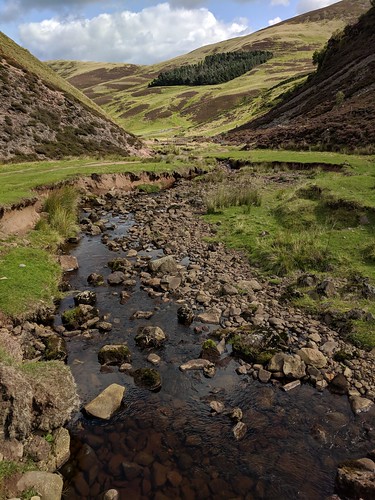 There were plenty of other people around. Walkers, runners and cyclists. A couple of guys flew down the side of a hill while I was taking the easy path. I raced to try and keep ahead of them, and I did quite well. I just caught them coming round the corner when I stopped to take a breather. Obviously I waited for them to pass. 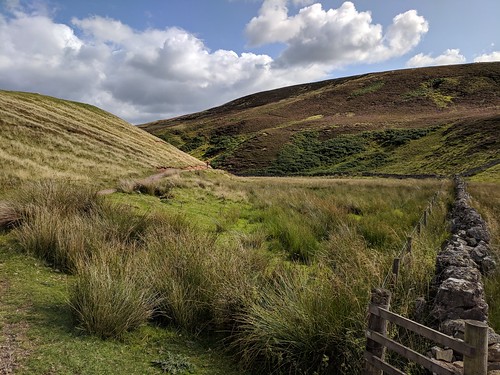 I put the camera away and thought that was that. I went through Balerno and hit the Water of Leith to head on the 10k sprint back, but this tree caught my eye. 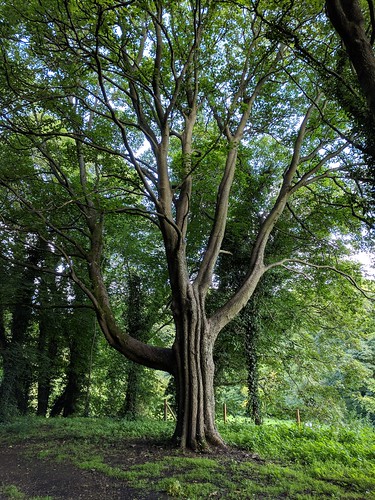 I loved the grooved trunk, and standing by itself it commanded viewing.

Finally, I remembered I had a couple of video tools I thought might be cool to try out on the path I was on. There were spots and streaks of light coming through the tree canopy and it looked great. It didn’t turn out so well on the camera though. Still, using Motion Stills to record the video I produced a nice, 12Mb quadruple speed video. Problem was that didn’t load into Flickr very well, so I ran it through Microsoft’s Hyperlapse. It’s a bit better on Flickr which has compressed it way too much, but still far better on the mobile or on Google Photos. Still, it’s fun, even with the annoying logo at the end. 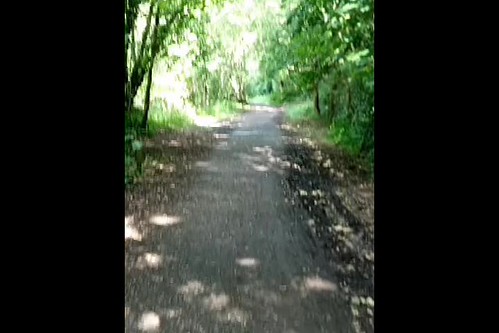 So that was my big weekend cycle. Somehow I came away with fifteen personal bests, three of which were on categorised climbs – two threes and a four – I pushed the bike up those though! I also had five second bests and a third best. I really don’t know why as I didn’t feel I was going any faster than usual, and I was using my mobile to track it since the Garmin is away for repair. I’ll say it was a tail wind.